This weekend: Pretty eventful. On Friday I came home REAL sweaty from dance class, which started on Thursday. 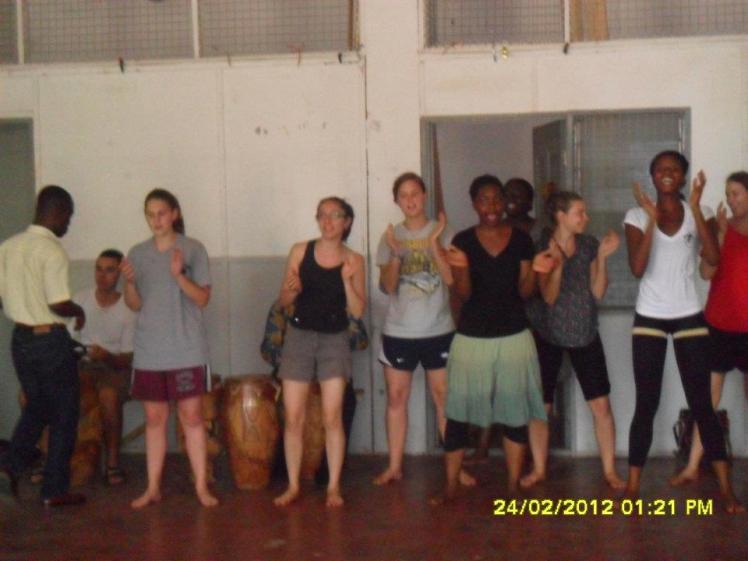 Then I met up with Ethan and Annie to go back to Tech where some people were meeting to watch some jazz and poetry reading at the cultural center on campus. But, when we arrived Maggie, Mimi, Anna, Liz and Morgan said there is nothing going on at this cultural center, or at the city’s cultural center…Instead about 10 of us went to a bar instead. Lexi, who’s 21, made a good point, that not having to show your ID is such a relief. We haven’t had to show our ID once since in Ghana. We all hung out there for a bit, but everyone was worn out from the day. Ethan was getting heavy eyes, and kept falling asleep at the table amidst the loud music from the bar. Around 9pm we left and everyone made it home safe.

The next morning I got up around 7; at breakfast and did some laundry. I was never shown how to do laundry, so I just kind of winged it. Unitl my “brother” (which I found earlier isn’t Mum Bea’s biological son, but just hangs out here alot) told me I have to scrub the material together, of whatever you’re washing, real hard. Only after I hung my clothes to dry did I think to myself how easy lanudry is back home. While here, I haven’t missed the mechanical luxuries from the States. They would be so out of place here and wouldn’t fit with the vibe of the country. Especially dishwashers. When I go back I’m going to feel so effecient, yet so lazy at the same time. After laundry I went to Kwame’s and Jesse’s because I thought we were going to the zoo. Instead they were lazy and Kwame took me to find a FedEx so I could mail some books that are just taking up space. It was a several hour adventure. But he was sweet and bought me a juice box, and an orange FanIce; which is similar to GoGurt, but bigger and better. The first FedEx we went to, the one lady who works there decided not to show up to work. So, we took a tro-tro ride into another part of town where we found out that it would cost 140 Cedis to mail some books. That was way more money than I wanted to spend. Instead I bought Kwame and I a chocolate bar and we went to the “fastest” internet cafe in Kumasi. Which also, was the nicest building I’ve been in, since in Ghana.

Then we went back home and I ate lunch with them because Aunite Grace, the housing coordinator and who lives in the same neigborhood, invited us three to a funeral. Grace gave me clothes to wear, and everything fit pretty much except in the chestal region. Everything was black and I wore a black headband. 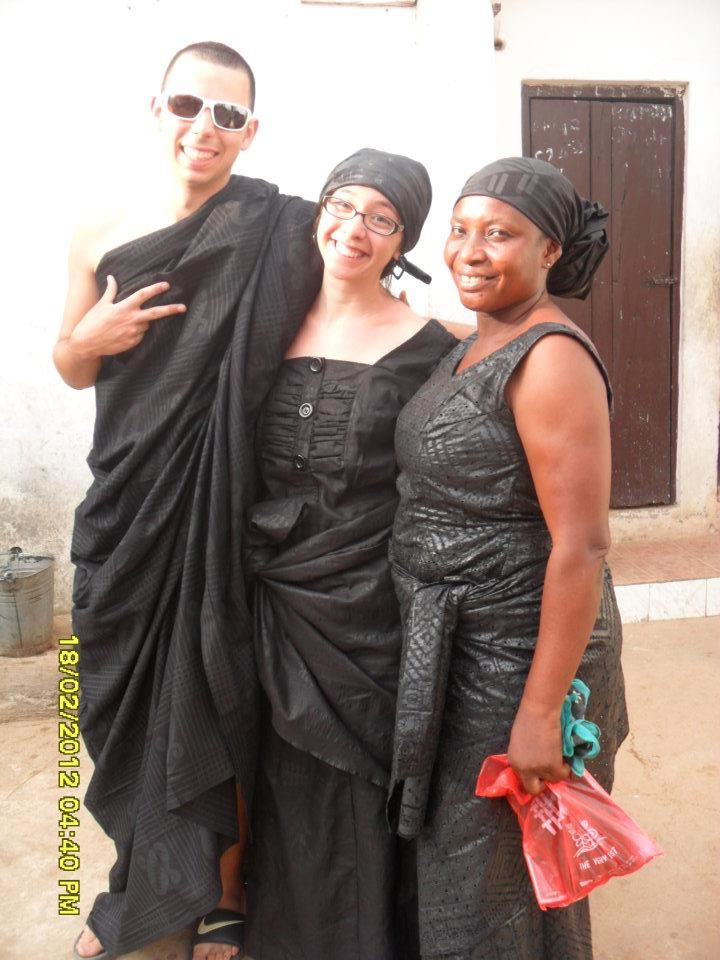 Thankfully we didn’t have to travel far and we danced for a bit and greeted everyone. Then we sat and had a beer. I liked the first funeral better because there was alot more dancing and with live music. Here, it took place in a courtyard and the chairs were facing some flowers and a photo of the man who died. The music was coming from speakers and only a couple women were dacning. Then we just left….Even though it’s supposed to be a celebration of life, I felt like I didn’t respect the person by just sitting for 2 minutes, dancing for 2 minutes, then drinking. Also, I feel like I’m going to come back heavier from all this beer! Then, the guys wanted to go to Kandy’s, a regular for Kwame. So, us three walked in the rain to Kandy’s where we just hung out. Then the power went out and everyone just pulled out their phones then went on as if nothing had happened. After about 10 min. it came back on and we went to dance outside while we waited for Grace and Maggie to show up. Overall it was a great Saturday, and was completley worn out by the end.

Sunday I went to church on 2 hours of sleep…But Mum Bea had a dress made for me and it’s SO beautfiul! I felt so traditional, like I finally fit in a little bit; and when I come back I’ll be lookin’ fly. Then later that day I went to an Internet Cafe, which was about a 20 min. walk-which felt great! I did some browsing, and got SOOO excited for Sasquatch!! That night I went to bed at 8pm, with no difficulty at all.

I got homesick a bit on Sunday because I miss weekends in the US where my family took advantage of the free time we had together. Here, there isn’t much to do in way of entertainment. But when Chiharu and Ayumi stayed with us, we planned everything and were SO excited to serve dinner, go out to movies, museums, etc. But, I feel like doing things isn’t really a big deal here, which kind of stinks.

The dance class is going really well, it’s difficult, but I enjoy it alot. I’m hoping to remember the dance steps so I can teach people (mostly Madeline) back home.

ALSO-my alarm clock is useless now. I lost the back piece the night before I left for Ghana so Alex had to tape the back..but it’s just not staying. Then on Saturday my watch broke, which is SO lame. Even though I bought it at the REI garage sale..so today on the way home Annie and I got similar watches for only 1 Cedi (about 80 cents…) so I’m expecting it to break in less than a week! Mine is purple and says “Kiss Me” hahah. Annie’s is blue and says “Modest”. At least I konw what time it is now..