I recently realized that I’ve shared several stories about wonderful Kiwis who’ve housed me, fed me and kept me company. But I haven’t introduced my true companion, ride and die, best of the best, Jack the Van. This red and white beast is named after the late Jack, Chris’s father, who passed away while I was here in July with the family. It will always feel unfair that I wasn’t there with him and the family during his last moments. Jack always had a heart of gold and never turned into the typical grumpy man. Everyone was greeted with a hug and he found humor in the world. He was an amazing man, truly special, and it saddens me to think I won’t be able to visit him on Green Lake and look through his photos as he narrates every image. I figured the next best thing would be to take him on one last trip – New Zealand!

I bought the van already set up for camping. All the fifteen year old bungee cords, curtains the color of fart, the cubbies, mattress, everything! I only adjusted a few things and threw my stuff in – easy. The daily items are all accessible with easy access. There is only one very annoying bit. Whenever I want to use the pots or pans or get a bowl I have to take out my backpacking pack, reach my whole body in and pull out the bin, which is fine. It’s just putting everything back because there is a piece of fabric that, I think, at one point covered the full floor of the van but only now gets in the way. It just bunches whenever I slide the dish bin back into place, so I have to slowly and carefully get it on top of the fabric. This process can take about 10 minutes. Of course, this reads far less dramatic than watching me put everything back in place. Just imagine lots of grunting and exhaling and talking to myself.

I am thoroughly pleased with this purchase. The only annoying thing is the driver’s window rolls down but doesn’t roll up. And the only way to get it up is by getting out and using both hands to guide the window up, but sometimes you have to do that several times before it’ll stick. Also the drivers’ side stereo speaker doesn’t work; it actually fell out when I attempted to fix it. But a nice electrician man worked his magic with tools and the speaker worked for about 30 minutes… but at least the speaker is screwed in now.

(And yes- I have one bin dedicated to jackets, three backpacks and six pairs of shoes. Some girls like shoes, bags and clothes…I like all three!)

AND BIG thanks to Chris, who provided lots of great advice on purchasing a van and spent many hours on TradeMe looking at other van options. 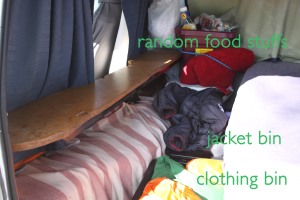 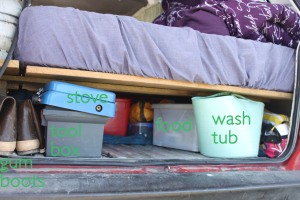