I have a job! Finally I’m putting the working holiday visa to good use. I was hired with J2 Contracting in Blenheim. Heath, from the previous exchange stay, told me about PickNZ a website specifically for seasonal work. I texted Nicolette, the labor representative of Marlborough County, and we planned a time to meet. The entire twenty-minute process was easy and smooth. I met with Nicolette and I filled out a sheet with basic information while she pretended to not be completely overworked. I was handed a card with a name and phone number. Back in my van I called Julie and she said text me your name, nationality and passport number. I asked how long the job lasted and she said, “Well. It depends on how fast you work.” After texting her my info I received a reply, “Ok be kfc 7am Thursday” Who needs grammar and punctuation? Apparently not the manager of a contracting company. With three days of freedom I decided to drive down the west coast headed toward Christchurch. The coast was breathtaking. Every bend demanded a soft touch of the brake. This is one of the frustrating aspects of traveling alone. The driver must drive and cannot stare out into the sea or at the rolling green hills. I stopped at Ohau Bay to watch the Fur Seals on the rocks. There were around 80 seals within my sight including a BIG BIG boy. Also along the road were small shacks selling crayfish, whitebait and fish and chips. I stopped into Nin’s Bin to take a look. The cheapest crayfish was 58 bucks, a little out of my price range, but it was fresh and caught by the fisherman across the road. Maybe that will be my Christmas dinner.

Processed with VSCOcam with hb2 preset

Onward I traveled until I reached Amberley where I camped for the night. I parked next to two perfect hammock trees where I set up my hammock and bug net and slept in it overnight. This was the first time I attached the bug net so there was lots of jumping, naturally. And I must have been entertaining for the Kiwi couple next to me because they invited me over for a glass of wine and commented on my foolish hammock dance. We talked for nearly two hours.

The following morning it was a wonderful new day. I felt good about recent life events and went on a run to the beach where I meditated and made serious determinations about personal morals and ethics. Solo travel does that to people – we have lots of quality, independent time to think and assess situations that often seem unclear when you’re in the moment of question. The drive to Christchurch was quick and I spent a couple hours walking and getting lost in the city. The big earthquake that shook the city took place FIVE years ago.

Processed with VSCOcam with g1 preset 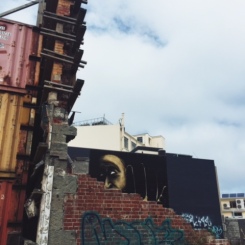 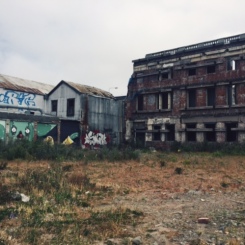 Processed with VSCOcam with c2 preset

Sounds of hammering, drilling and heavy machinery provided the soundtrack to the spray-painted walls and broken windows. Even with all the construction, it was like heaviness muted the sound. Like the air was gray but the sky was blue. The only sign of life and hope was at the Re:START Mall in the center of the city. It was an outdoor mall with individual stores occupying containers. There were clothing, home good, grocery and fresh food shops. One man was playing the guitar and singing his heart out to the small crowd. Another young girl was Irish step dancing on the road. The mall was an attempt to distract the city from the empty buildings and USSR-esque feeling- like Shirley Temple distracting America from a major depression. Progress is slow, but the sites were buzzing with pimply boys in hard hats and orange vests, dedicating a few years work to rebuilding a once beautiful city.

Feeling thoroughly sad, I continued on the road until I reached Castle Hill. This wonderful place, boulders along the grassy hill like a giant child had thrown pebbles into the grass. Castle Hill is known to be the best bouldering spot in New Zealand. Most of the routes are slabs and mantles because of the smooth and roundness of the rocks. I grabbed my rock shoes, almonds and water, just completely buzzed about the chance to get my hands on real rock. I joined a group of Australians who were visiting with their outdoor group from the University of New South Wales. They were immediately friendly and insisted I climb with them. 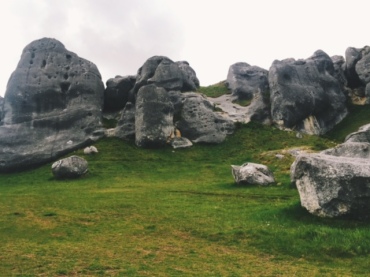 Processed with VSCOcam with f1 preset

It was the first time in four months I attempted to boulder and it was rough. My body was confused and stiff, my back and shoulders were weak. It was definitely a slap in the face, realizing the amount of climbing strength I’ve lost. The second route I attempted was running slab, which required a running start to jump on the rock. Unfortunately after a few tries I wasn’t able to send the route. But one of the girls, Isabel, caught her foot on the mat as she was jumping for the rock and twisted her ankle. She immediately fell back and howled in pain. I was holding her shoulders since we were set on an incline and her head was pointed downhill. The leaders of the group and a PT wrapped her ankle and walked with her to the carpark. It was a short visit to Castle Hill but I stayed at the same campsite as the Aussie’s and we had a good night of conversation and math puns.

My last day of freedom before labor work I spent driving – about six hours total. It was rainy all day so I wasn’t very physical.

Just as I was nearing Greymouth I saw a sign to view a large boulder. It sounded interesting so I followed the gravel road. There was a large white, faded sign that read “Londenderry Rock 600 meters.” My gut was not feeling right as I saw the steep gravel hill leading to the boulder. Okay Jack, let’s give it a go. Thirty seconds on the road and I decided this was a bad idea. I turn around and at the hill I hit the gas to get over but the tires just spun helplessly. I let the van roll backwards and instead of staying on the road the right side fell into a small ditch. It could have been far worse because only a few feet ahead it was even steeper. I didn’t panic in the moment, but just got really annoyed. I was on a quiet gravel road on the South Island, which has only one million residents, about an hour walking distance from the closest shop and it was raining. BUT I had service. I called AA and a nice man with a Honda CRV came to pull me out and failed after six attempts. AA suggested I get a tow truck to rescue me but the bill would have been staggering. Instead I got a ride with the nice AA man with a Chinese character tattooed on his neck, his car heavy with man scent. He dropped me off at a General Shop in town and I asked the couple if they could help me. The man, from England, didn’t hesitate to gather his gear and drive me back to Jack. It took several attempts but finally Jack was free! And I never saw the stupid rock.

Processed with VSCOcam with f1 preset

Processed with VSCOcam with hb1 preset

The rest of the day was spent driving. I stopped once to take a shower with an honesty box to pay the five-dollar fee. I paid two dollars instead because FIVE dollars for a shower? That’s insane. I stopped again to buy farm fresh eggs, $2.50 for a half dozen then whipped up the worst mixture of food – rice, tuna, eggplant and bell peppers. There’s a reason tuna fried rice doesn’t exist.