I followed Shane, a petite Malaysian woman with short black hair and a commanding presence, to the break room. She introduced me to the pack house workers, a group of eighteen Malaysian women, one Singapore woman and one butch German woman.

“Everyone, this is Sam and she is working with us today. She came from the orchard,” Shane said in her accented English.

I was washed in unison with a high-pitched “Ohhhhhhh,” as black hair swooshed and turned in my direction. For the pack house employees working in the orchard was seen as a tough and laborious job. Meant for anyone but those from South East Asia; and this stereotype held relatively true. The picking team consisted of French, German, Italian, Dutch, French-Canadian, Argentinian, Uruguayan and American. For the first time, my almond-eyes and black hair was not an anomaly.

The group shuffled along until we reached the massive building used for cherry processing. One of the women gave me a blue starchy material, which was to be my hospital-like gown uniform. My head was covered with a net, my forearms were recovered with the same starchy material and my hands were wrapped in size medium latex gloves. Let’s party. 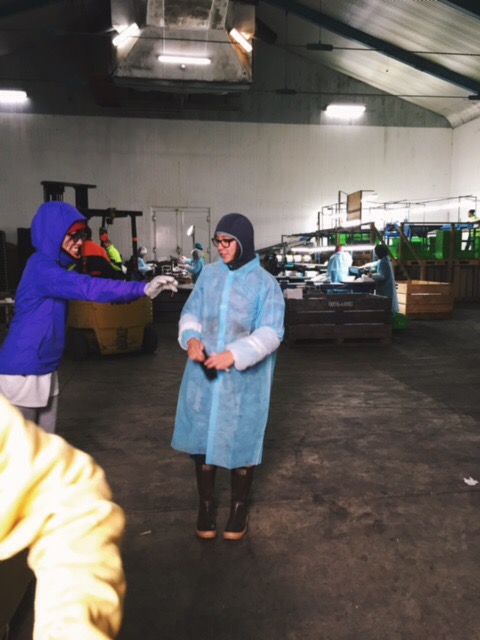 The layout was impressive. I felt transported to China or India. T﻿his was a legitimate factory. Instead of gluing rubber soles onto Nikes, we were grading organic cherries. I was placed on the second level at the start of the process where six of us were greeted with bucket after bucket of chilled cherries poured by one of the Vanuatu men. Once the assembly line was flicked on I was given instructions of good cherries stay, bad cherries leave. The table rested at mid-stomach with the help of a crate for extra height, and the pressure from leaning against the stomach allowed me to rip some good ones, filling the cold air with a heavy stench. Sorry guys. Within the first hour my neck began tightening and tensing and my soles had lost feeling. After some adjusting I found that standing straight up and not leaning on the table made for less strain on my lower back. But even with blue SuperFeet in my Brooks my feet were tender after the eight hours shift. Every smoko (the Kiwi term for break) came as a relief, with a smoko before and after the thirty-minute lunch. I hobbled down the four steps and walked stiff legged to the break room where I sat with the Muslim Malaysian girls. We talked about New Zealand and how I don’t eat rice, and am I on a diet because I’m not eating rice.

Throughout the day we listened to music with speakers that filled the room with music from the Chinese New Year. Apparently every city in China has its own New Years anthem and so I was introduced to a healthy amount of celebration. I put on some tunes, but the downstairs team did not appreciate Bonobo, Damien Rice or CocoRosie. Chris and the German butch were packing the cherries, which required agility, speed and Black Eyed Peas-like beats. Whereas the majority of us never felt rushed, easily managing the rolling tide of fruit.

My second day of the pack house shift was the last day of processing cherries. Everyone was in a jolly mood and ready for a month off before the apple season started. At the end of the day there were posed group photos, selfies with other workers and selfies with the assembly lines. To my left and right were iPhones at ear level, waiting for me to crouch and smile. The three white people in the room darted eye contact to one another, wholly overwhelmed by the obsession of photo taking by the Malaysians. We were like deflated cheerleaders.

I finished the day with the nasty task of cleaning crates and watching pack house employees spend half an hour at the ENZA Organic sign taking turns photographing and modeling. I turned back to hosing the green and yellow plastic while thinking about the factory workers in the neighboring South Pacific and South East Asia countries, wondering what they would think of this scene. I can only assume it would be confusion and envy.